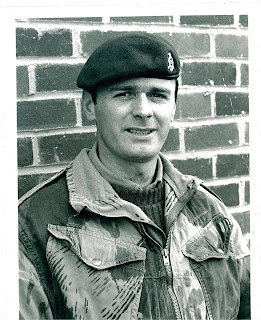 This week was my father's funeral. The last couple of weeks have been a bit odd as a result, but I have found out some things about my dad that are really impressive. One of the things I found was the details of the entry exam he would have had to pass to join P Company/ 7 RHA. You can see the fitness requirements here:
http://www.army.mod.uk/artillery/regiments/24671.aspx

I am currently nowhere near fit enough to do this, but that is something I am going to change. In a years time I am going to try to do the same physical tests for charity. I haven't worked out how or where yet, I figure the first part is to get fit enough to do it. My first bench mark for it is this: http://extreme-stampede.co.uk/ a 10k with obstacles run in September, so please consider sponsoring me for that run. Alternately if I have reached my very modest sponsorship goal please consider giving to the RNLI or Stroke association both of which had meaning to my Dad.
https://www.justgiving.com/Dave-Thompson15
http://rnli.org/Pages/default.aspx
https://www.stroke.org.uk/
Posted by Unknown at 03:22 No comments:

The ID DM has some DMG previews that talk about generating memorable NPC’s. So I thought I would take it and apply it to some of the NPC’s in Cannakale. Here they are with more to follow :

Some of the secrets and useful knowledges are in white to prevent them from being easy for my players to see. Highlight the entries to see them.

Dianakous - Elf, Noble, (originally played by Matt) Cleric of Hades. Town Legate.
Talent: Draws beautifully.
Mannerism:  Speaks very carefully
Interaction with others: Acts friendly
Useful Knowledge: Knows a secret way into level 3, and some of Hades Plans.
Ideal: Greed
Bond: Loyalty to the Church of Hades and his uncle
Flaw: secretly believes everyone is beneath him.

Pennicus - Trader. Weasly skinny, little bit whiney, rubs hands together. WantsaAdventurers to find a route down to the dungeon market on Level 2. Has a bunch of books for sale.
Talent: He is a skilled actor,
Mannerism: Talks around the subject all the time
Interaction with others:
Useful Knowledge:
Ideal: is a trade empire surpassing boundaries of normal countries
Bond: Will keep his trading house’s secret.
Flaw: Arrogance
Secret: His trading house has ended up with the Golden skull and he wants to sell it back to the Temple of Elemental evil.

Etcetera. Goblin spy. No one is sure what he really looks like.
Talent: Actor and “master of disguise”
Mannerism:
Interaction with others: Curious,
Useful Knowledge: He knows where the goblin king has gone.
Ideal: Whimsical
Bond: Captivated by his romantic interest in Mouse.
Flaw: He is a goblin, and therefore is a personification of a bad idea.

Frances Gottlestotch. Skinny but always well dressed, immaculately clean, Bar keep
Talent: great at throwing darts.
Mannerism: Prone to predictions of doom
Interaction with others: Gruff
Useful Knowledge: Asura’s secret.
Ideal: Might
Bond: Protective of the town.
Flaw:  Is a serial killer, usually controls himself at home (do not shit in thy own nest) goes for young men with big egos

Beppolenus slightly twitchy. always seems a little bit stoned, really likes adventurers and comes to all the carousing (if he is invited or not), Farmer. Wants to be an adventurer and will be, damn it, the moment the apothecary gets the mix right on his pills
Talent: expert carpenter
Mannerism: Twitchy
Interaction with others: Ponderous
Useful Knowledge: Knows what is in the basement of the House of Fragrant Dreams.
Ideal: No limits
Bond: Really fond of adventurers and loves what has happened to the town.
Flaw: Always seems slightly stoned.
Secret: Is being drugged by Marsheed because he knows about the stuff in the basement of the House of Fragrant dreams.

Helius, Human male looks like Pete Postlethwaite fisherman. Saving up for a bigger ship, wants to be a trader, and then lead a trading fleet.
Talent: Great with animals
Mannerism: Paces
Interaction with others: Friendly
Useful Knowledge: Has clues about any coastal location on the map.
Ideal: Greater good
Bond: Dedicated to fulfilling his personal life goal and protective of his boat.
Flaw: Prone to rage

Charito, dreadlocks, half cast, pockmarked skin. female half elf, smells odd, Alchemist / Herbalist
Talent: expert cook
Mannerism: Twirls/tugs on dreads
Interaction with others: Honest
Useful Knowledge: Used to be a druid knows things about the local druid cults.
Ideal: Life
Bond: out for revenge
Flaw/ Secret: Was a druid of the blackwood that used to worship the elements but managed to figure out how not to turn into an elemental, is hiding out in town to try and teach more of the druids.

Marsheed a middle aged, Human, thin, smells odd, Owner of the House of Fragrant Dreams
Talent: Knows thieves cant.
Mannerism: Chews something
Interaction with others: Suspicious
Useful Knowledge: can and will make poisons, and less savory alchemical mixtures.
Ideal: Independance
Bond: Drawn to a special place (his shop)
Flaw: He is very jaded
Secret: Functionally immortal he is waiting for the jailor of the things beneath his shop.

Francis, Gnome, with buggy eyes, Ex-bandit turned informant, Was spared by adventurers including Iola and Orien has turned into an informant and general hanger on at the arena.
Talent: Expert juggler, Good with badgers.
Mannerism: Excited.
Interaction with others: Enthusiastic.
Useful Knowledge: Knows where the hideout of the bandits operating on level 1 is.
Ideal: Aspiration
Bond: Loyal to his pet badger.
Flaw: Foolhardy bravery

Email ThisBlogThis!Share to TwitterShare to FacebookShare to Pinterest
Labels: DnD, DnDNEXT, Gaming, This is Thracia, Troy

Nano is going well and I am currently only a little bit behind word count but I’m keeping up ok. Feel free to add me, I am Davetrollkin on the NaNo site. Also, follow my progress here: http://nanowrimo.org/participants/davetrollkin/novels/troy-mega-dungeon

This post is inspired once more by this post from Jeff Rients (and by being a quick way to add to my word count): http://jrients.blogspot.co.uk/2011/04/twenty-quick-questions-for-your.html

Here are 20 Questions for Troy and the larger Thracia setting.


The most common clerics in the area worship the Greek Pantheon from the back of the DnD Next PHB. However all the mythical pantheons are active in the world to one degree or another so, if you are from a distant land you can follow that pantheon. The Celtic, Egyptian and Norse pantheons are the most common alternatives.


There is a general goods (recently rebranded as Adventuring goods) store in town run by Gremag (a thin waspish man) and Rannos Davl (a fat, clumsy and abrasive man). The dungeon market on level 2 also has a “Secondhand Adventuring gear” stall run by a dark dwarf.


Formosos the Blacksmith in Canakale is excellent at most armour smithing. However full-plate is only made by dwarven followers of Hephaestus (some of whom live in the dungeons under Troy).


There is a chap named Merlin in Breton. The Master of the Diviners Guild is pretty high up but his name is shrouded in secrets. The Headmaster of the University in Alexandria also a contender.


Dianakous the Legate is making a shit ton of money taxing adventurers that emerge from the dungeons but no one is sure where that money is going.


Charito the Alchemist sells healing potions and other cure alls. The less reputable House of Fragrant Dreams also offers a selection of potions including some healing ones. The temple in town has some low level acolytes and Dianakous is a powerful cleric (if you are willing to accept the blessings of Hades)


Dianakous is your best bet. Otherwise it would need a trip to Constantinople.


There are guilds across the failing Roman empire for each of the colleges of magic. The most influential is the Diviners Guild: http://projectmultiplexer.com/2014/10/11/on-the-great-divination-wizards-guild-and-the-black-chamber/  There is also a massive university connected to the library at Alexandria.


Valthrun the Sage has a short tower on the outskirts of Cannakale. Charito is an odd looking ex-druid who runs an apothecary in town.


A bunch of hirelings and hhugs hang around the arena. The next town East Bandimar also has a reputation for ne’er-do-wells so might be a good place to hire unscrupulous thugs.


Clerics and priests are outlawed in Constantinople.


The old half finished arena in Cannakale has been converted into an Adventurer's Tavern. It has the old table map and the dungeon loot scoreboard.


The undead lords of levels in Troy. A beholder lairs somewhere in the thracian mountains. A white dragon (far from home) is occasionally seen over the Black Wood mountains. Something has made a lair (and a lake) out of the former site of the Temple of Elemental Evil.


Yes. The Empire has campaigns of conquest in Gaul, The germanic forests and Breton. Meanwhile closer to home Greece has fallen back to petty kingdoms at war with each other.


The hippodrome in Constantinople is apparently the biggest and most prestigious in the world.
The colosseum in rome is still running games even while the rest of the city falls apart.
While in Gaul the largest arena outside of Rome has recently been finished in Lutetia (Paris).


Yes. Most of the Gods have a mystery cult. There is supposedly a titan cult operating in secret in the town. Rumours point to the emperor being in league with the Temple of Elemental Evil.


Relics of the gods and fragments of the palladium are secreted throughout Troy. Along with hoards of treasure.

Troy or see monsters terrorising the countryside above.
Posted by Unknown at 04:01 No comments:

Email ThisBlogThis!Share to TwitterShare to FacebookShare to Pinterest
Labels: This is Thracia, Troy

I have decided to use NanoWrimo as an incentive to get the entire dungeon finished!

You can watch my progress here: http://nanowrimo.org/participants/davetrollkin/novels/troy-mega-dungeon/stats

In the mean time i’m using Gygaxian democracy to make a table of random ghosts for my Troy Megadungeon. I’m looking for 3 sentences for each ghost; Who they were in life, How they died, How they escaped Hades.

Ideally i want about half Trojan war casualties and half other people who ended up in hades (people who died in the old Thracia campaign for example).

I stuck this request on Facebook to start with and got an amazing list of people who died in the Iliad and Odyssey from Everwalker. Now i’m looking to fill the rest of the list with Adventurer types to round out the selection. Drop your dead guy ideas in the comments.

and a list of cool dead guys from the area.

I also have an updated Scoreboard with the players rocketing to the top after a fantastic haul from 2 stashes of treasure.

Are you running D&D? Want to stick your group on the scoreboard? Drop their details (party name,  level, composition and total loot gained from adventuring so far) and I will add them as more adventurers flock to the mega dungeon.
Posted by Unknown at 04:17 No comments: